In January 1996, Juan Mari Beltran Argiñena and the City Council of Oiartzun reached an agreement for the start-up of Herri Musikaren Txokoa. The center opened its doors to all audiences on March 1, 2002.Herri Musikaren Txokoa is a documentation center and meeting place around Popular Music, dedicated to publicize everything related to music and popular instruments, as well as to its dissemination, promotion and research.

Languages of the book: Basque and Castilian (translation).

Other languages: summaries in French, English and German. 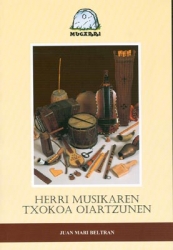 REQUEST
This website uses cookies, both its own and those of third parties. Select the option of cookies that you prefer to navigate even its total deactivation. If you click on the button "I accept" you are giving your consent for the acceptance of the mentioned cookies and the acceptance of our cookies policy. If you want to determine what you accept and what you don't, click on "Configuration". Click on the "Read more" link for more information.
I accept Configuration